HISTORY TOLD BY 3D MAPPING - experience 1000 years of victories and defeats in the heart of the fortress! Two cisterns from the 15th century were hidden in the heart of St. Michael’s Fortress until recently. Today, the walls of the cisterns are the backdrop for the presentation of the rich history of the fortress and the city. A demanding project in the cisterns was implemented to set up the most modern technical equipment needed for the screening of contents onto the curved and roughly plastered walls of the cistern. The image and sound backdrop consists of 34 projectors and 16 speakers that cover 90% of the wall surface.

Look in the tanks

The cistern and its arches have been turned into a time machine that takes you through the centuries of Šibenik and the most important events from the creation of the city until today, with a special emphasis on the fortress from which the city originated.

The second cistern offers the story of the all-time struggle of good and evil, in the Christian tradition often represented by the fight of St. Michael and the dragon. The archangel, whom we often come across on the mountain tops, was the protector of Šibenik from the very beginning.

There has been a series of archaeological campaigns (1972-77, 1990-96) on St. Michael’s Fortress and since 2017, they are carried out every year. Due to several thousand years of use, hundreds and thousands of material remains have been found at the fortress, dating from the Iron Age until World War II.

In the breaks between the main screenings, the cisterns show a multimedia 3D exhibition of the most important and best-preserved findings which testify to the long-term continuity of use of this location. 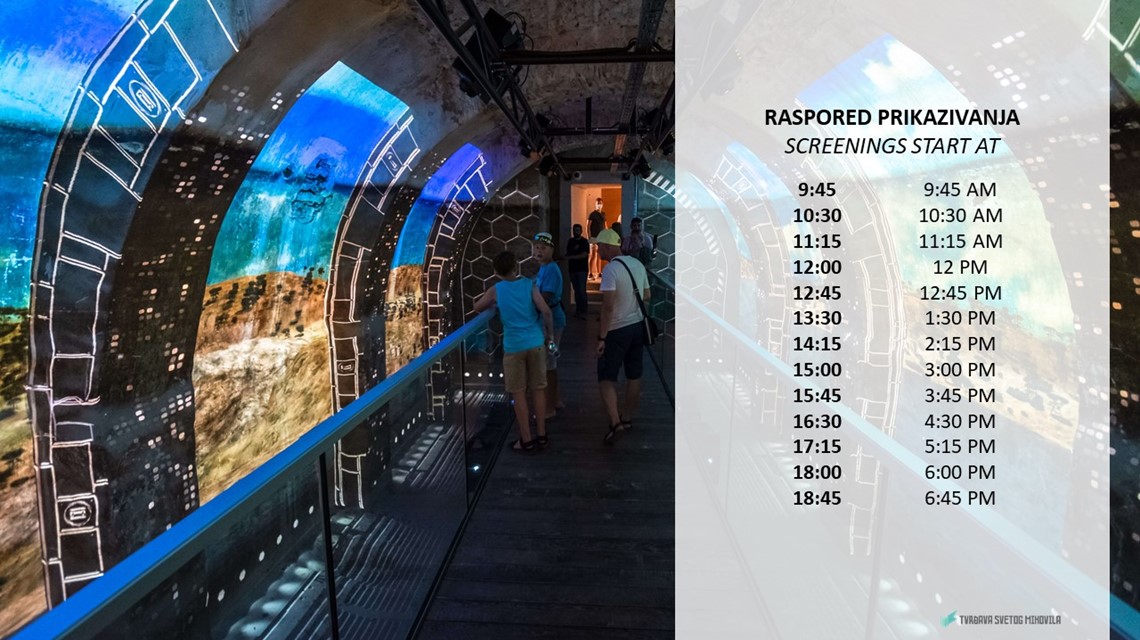 Borrow a multimedia audio guide at the Info point; it complements the existing signalization and historical contents of the fortress. Are you interested in a certain part or structure of the fortress? How to recognize which part of the walls is older and which has been reconstructed?

Go around the fortress with a tablet in your hand and headphones in your ears and the content will activate on its own at the moment of passing next to the point where the transmitter is located. You don’t necessarily have to follow a certain order - each topic is a separate line in history. Be the creator of your route! Technical partner on the project in the cisterns: Tehnovod Marušić

Production of contents in the cisterns: Produkcijski team d.o.o.