The Fortress of Culture, as part of the European project EMOUNDERGROUNDS, commissioned a detailed photogrammetric recording of all the interior and exterior walls of St. Michael's Fortress. After signing the contract between Institution and contractor Zadruga ARHEO KO-OP, the first meeting was held. The timeline for the preparation of the documentation of the ramparts was discussed, as well as the location where the plaster sample for C14 dating will be taken. 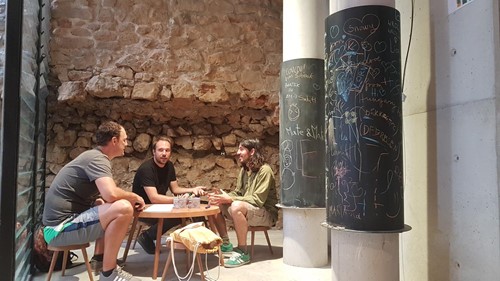 This research will complement relatively modest current research documentation on this oldest cultural monument in Šibenik. The plan is to made a high-precision 3D model after the recording campaign with geodetic and laser instruments that will capture both inner and outer faces of all the old walls.

The participants on the project are nine partner cities from Italy (Nardo, Capri), Greece (Andravida-Killini), Croatia (Rijeka), Slovenia (Koper, Ivančna Gorica), Montenegro (Bar), Bosnia and Herzegovina (Trebinje), and Albania (Kukes). Total project value is 2.605.497,06 Euros, 85% of which was co-funded from resources from the European Union's ERDF and IPA II funds. Fortress of Culture's budget within that project was something south of 2 million kunas (264.387,78 Euros), while the most significant investment within the project was made toward the implementation of a storytelling VR technology on Šibenik's fortresses.