In less than 10 days - Šibenik Heritage Showcase at Barone Fortress

On September 29th, the day when Šibenik celebrates its patron St. Michael, the Šibenik fortresses traditionally open their doors to all visitors. Additionally, this year at the Barone Fortress a presentation of the heritage of the Šibenik region is prepared. Šibenik Heritage Showcase includes three thematically diverse conversations about heritage, a tournament in traditional card games, as well as the preparation and serving of a traditional Dalmatian specialty čičvarda (traditional Dalmatian stew).

The programme starts at 10:30 AM with the start of the tournament in briscola and tressette, card games that over the centuries have become a symbol of everyday fun and entertainment in Dalmatia, but also in the wider Mediterranean. Eight teams of two players will compete for the first place.

In parallel with the tournament, interesting talks will be held on the stage of the fortress. Film critic Jelena Pašić and historian Andrija Bakula will present the century of development of cinematography in Šibenik - from the first shots, films and cinemas through the peak of cinema activity to the present day.

The second conversation takes us to the time of the Republic of Venice. This year, a new illustrated guide to the Venetian legacy was published in the area from central Italy to Cyprus. It was written by a young couple, journalist Giovanni Vale and translator Ivana Pogačić, who will explain what is behind the first title in the "Disappeared States" edition.

The last but not the least is panel discussion "With a diploma in hand, are we in trouble?". Students and graduates from Šibenik whose studies are closely connected to history and heritage will reveal what they are currently studying, what motivates them in their professional way and whether they see perspective for further professional development in the city and its surroundings. 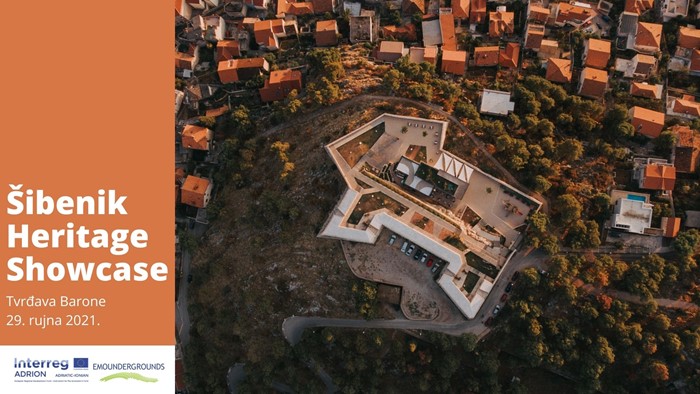 Šibenik Heritage Showcase takes place as part of the EMOUNDERGROUNDS project, which the Fortress of Culture is implementing with 9 partners from 7 European countries. All of them, as well as others interested, can follow the event live on social networks of the project and at Barone Fortress FB page.

Let us remind you that the total value of the EMOUNDERGROUNDS project (EMOtional technologies for the cultural heritage valorization within the UNDERGROUNDS cross border) is 2,599,994.86 euros, of which 85% is co-financed by the European Union from the ERDF and IPA II fund. The budget of the Fortress of Culture amounts to slightly less than 2 million kuna (264,387.78 euros), and the most significant investment within the project relates to the implementation of VR technology for the purpose of storytelling at Šibenik fortresses.