This summer, as part of the European project EMOUNDERGROUNDS, the Fortress of Culture commissioned a detailed photogrammetric recording of all the interior and exterior walls of St. Michael's Fortress. The reason for this is that the current research documentation on this oldest cultural monument in Šibenik is relatively modest. The first basic floor plans were made in 1972, just before the start of the first archaeological works, in collaboration with the Institute of Art History and former Regional Institute for the Protection of Monuments. Then, in 1978, the Faculty of Geodesy made a plan of the outer face of the northeastern part of the ramparts, which is to this day the only document that shows the stone style of the fortress in detail. Certain documentation was also prepared by the local Conservation Department between 1988 and 1994.

The opportunity to improve this situation, i.e. to create modern, digital recording of all walls, appeared by participating in the EMOUNDERGROUNDS project. The aim of 10 project partners from 7 countries is to improve the offer of their monument sites, mostly fortresses. The walls of St. Michael's Fortress for these needs were thoroughly cleaned, and the recording campaign began in June. Through thousands of photographs and points taken with geodetic and laser instruments, recordings of the inner and outer faces of all the old walls were made, as well as a high-precision 3D model. The contractors are done with the work - check out 3D model at the following link: bit.ly/TvrdjavaSvMihovila_3Dmodel. By diging into the literature on the fortress, the images that have been made passed an expert analysis, and significant discoveries were made, which will be discussed in the upcoming months. 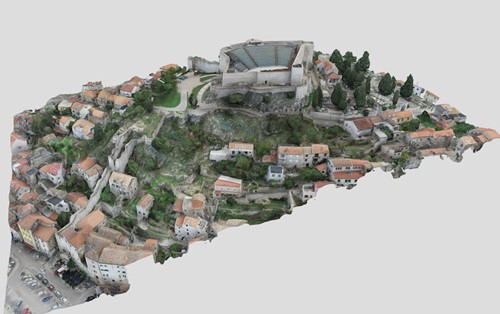 As a reminder, the total value of the EMOUNDERGROUNDS project (EMOtional technologies for the cultural heritage valorization within cross-border UNDERGROUNDS) comprises 2.605.497,06 Euros, 85% of which was co-funded from resources from the European Union's ERDF and IPA II funds. Fortress of Culture's budget within that project was something south of 2 million kunas (264.387,78 Euros), while the most significant investment within the project was made toward the implementation of a storytelling VR technology on Šibenik's fortresses.